Have You Met The Legend Cyril Kenny? 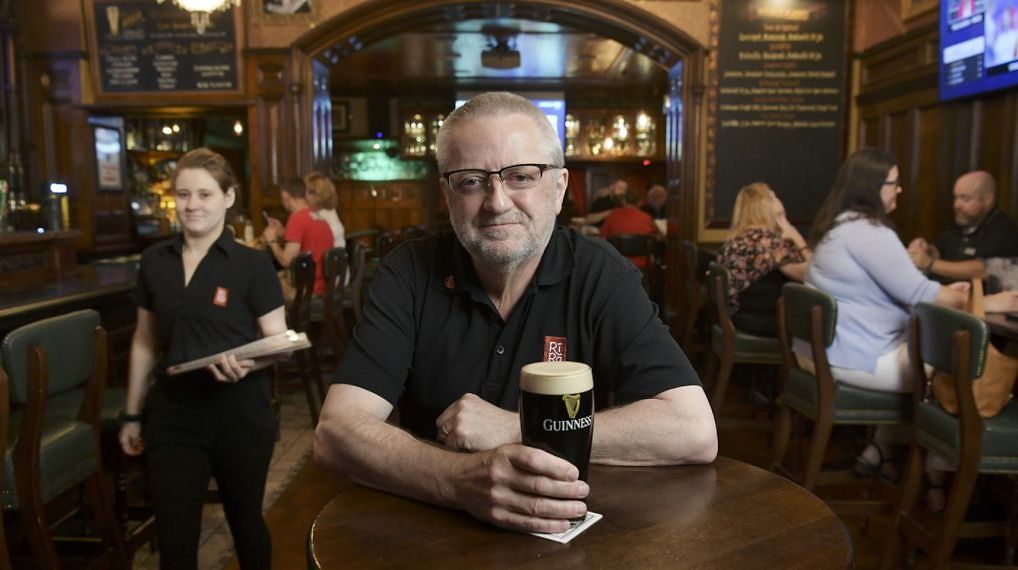 Many bartenders are characters, but few have the character of Cyril Kenny at Rí Rá Irish pu

“There are few professions whose primary objective is to advance the cause of humanity rather than simply to make money or accrue power. Among this limited group of humanitarians, I would number teachers, nurses, bookstore owners — and bartenders.”— Author Jack McDevitt

There are no such things as leprechauns.

This is undeniable right up to the moment you meet one. And he pours you a brew.

“A lot of customers get me name wrong. It’s Cyril, but I hear everything — Cyrus, Cereal, serial killer. I say, ‘No harm, call me whatever you want, I’m your bartender. I’ll take care of you.’ But one thing I don’t like to be called is Paddy. They go, ‘Hey Paddy!’ Because we’re Irish they think we’re all Paddy. No. Call me Cereal.”

And with due respect to your fellow barflies (there are no finer people on Earth when you’re in mid-imbibe), his is the ear you want to bend.

The shoulder you want to lean on.

The Irish brogue you want to swoon to.

And a genuine hospitality hero.

Coincidentally, Kenny from Kilkenny was named precisely that when the Las Vegas Convention and Visitors Authority (LVCVA, which produces Las Vegas Newswire), presented the barkeep from Mandalay Bay’s Rí Rá Irish pub with a Hospitality Hero Award earlier this year.

“I come into work and the next thing Mr. Goodman is presenting this to me,” says Kenny, hoisting up the award and gently setting it down next to him, eyeing it like a rare jewel he never dreamed he’d possess.  He is still touched and a bit agog at the honor bestowed on him as part of the LVCVA program that recognizes outstanding hospitality workers in Las Vegas.

(Oh, and by “Mr. Goodman,” he means ex-mayor/current LVCVA Host Committee Chairman Oscar B. Goodman, whose favor Kenny curried at the award ceremony when he was asked about his personal favorite beverage and named Bombay gin, famously the preferred libation of our town’s onetime chief exec. Shouted Goodman: “Do we have another award for him?”)

Can’t you see that man’s busy? Snapping selfies with customers over the bar. Crowing with them about the soccer success of the British Leicester City team, which Kenny claims won its championship a few years back by overcoming “5,000-to-1 odds” (seems a stretch, but OK). Scurrying over to schmooze a new party of seven he obviously knows from schmooze sessions past. Oh, and serving drinks. Plus, re-hoisting his award and pointing it toward young server Demy Somera.

“I’m going to pass it along to the next generation!” he says.

“He’s the best — THE BEST!” Somera answers back as she buzzes behind The Master, balancing a drink tray. “A lot of people come back just to see him, like: ‘How is Cyril? Where is Cyril? Is Cyril working today?’ He’s very charismatic. There’s not a bad bone in Cyril.”

Do the math and you might dismiss bartenders — particularly in a resort city where they flow through the workforce like beer from a tap — as the proverbial dime a dozen. Get served by Kenny, however, and another math-inspired expression could materialize in your beer foam: one in a million. Or, to add a mixed metaphor to your mixed drinks: In the desert of incivility, boorishness and social media sludge through which we trudge these days, leaving us parched for the niceties of yore, Cyril Kenny is a bracing bucket of ice-cold lemonade.

“Not too long ago I had a gentleman come in — marriage was more or less gone — and he thinks drinking is going to solve that?” Kenny says. “After five or six pints, he starts telling me what’s going on in his life. I think, how can I charge this man for his beer? I try to give him some food, calm him down. That man is still in my mind. I phoned him the other day. And he said he is coming to visit and thinking of moving to Vegas. I do worry about people. Where are they now? Do they still have the same problems?”

Within this mini-emerald isle, the consensus among both Rí Rá patrons and co-workers is that the kindly, 5-foot-8-inch gentleman in the gray buzzcut and librarian-style glasses is the lifeblood of this bar — and for a fair portion of its customers, their entire Vegas experience.

+ Guests are so enamored of him that they email and phone the bar beforehand to find out his shifts. “Ever hear of Evansville, Indiana?” Kenny asks. “I love that little town. Those people will actually fly to Vegas and come see me. I say, ‘Why, lads?’ I would understand if I was Elvis Presley or something, but I’m just an Irish bartender.”

+ He’s a Vegas and Ireland encyclopedia on legs and anecdote-dispensing raconteur. “I love meeting people from all over the world and telling them about Vegas,” Kenny says. “And then I talk about Kilkenny, which is my second hometown. But Vegas is my hometown, I never want to leave it. Vegas is my numero-uno.”

+  He could open a small store with all the gifts, cards, football jerseys, hats and other miscellanea that are dropped off for him.  “I wish people would ask my size before they send me shirts!” he says with a chuckle. “I don’t ask but they give me these things.”

+ He has been known to show patrons around Las Vegas, drop them off at restaurants he recommends, ferry them to the airport to catch flights, and even visit hospitals when local customers he considers friends are felled by illness. “He will treat complete strangers like family,” says fellow bartender Wally Lang. “When people can experience that type of friendship, it’s a unique quality.”

+ While he’s a talker by trade, he doesn’t need words to endear himself. “He has this whistle and it’s not a whistle like anyone else has,” Lang says. “People are looking around for some kind of bird. Kids love it, they smile when they hear it.”

+ And because the man dubbed Rí Rá’s “pub ambassador” is what pop-culture slang-slingers might call “totes adorbs” — or, in grownup lingo, irresistibly cuddly.  We dare ya to find someone else who utters the phrase, “Oh, jeepers!”  … Yeah, we thought not. Although …

“The Irish have an innate ability to use curse words as if it’s a normality!” says supervisor Scott Sherman, an unabashed Kenny admirer who nominated him for the Hospitality Hero Award. “When I hear it, I’m like, ‘Oh no!’ But the people hear it and think it’s the best thing on Earth!”

Adds Kenny, sheepishly: “I do say things, oh gosh, yes. I might have my head down working on cocktails and I might let the F word come out. I don’t realize that I’m close to people. But that’s part of our lingo, our culture!”

A former “telephonist” (American translation: telephone operator) for the Ireland Department of Defence (“probably where I learned to talk so much,” he quips) and frequent presence on “the other side” of most bars, Kenny transitioned into the work he loves when he relocated to England and called out numbers at a bingo hall.

Slight problem: Players were marking off the wrong numbers because they couldn’t make out his accent.  That’s when the manager moved him behind the bar to pour out pints of Guinness instead. “It became a calling,” Kenny says. “I spent so much time watching bartenders work. Some of the bars I used to go into in Kilkenny, they were storytellers, fantastic characters. They weren’t just tending bar, they were making people feel welcome into their premises.”

“I could never do management, I had to be bartending where I meet people,” says Kenny, who has also been known to turn away tips or buy patrons drinks when he thinks they’ve tipped too generously.  “Sometimes they’re a little over-inebriated and not in the right frame of mind,” Kenny says.

“One man gave me a hundred dollars because I was from Kilkenny and his family dates from Kilkenny. It’s embarrassing. I didn’t do anything to deserve that tip. So he put it back in his pocket — and gave it to another bartender!”

As “totes adorbs” as he is, even Kenny realizes that occasionally, patrons get the grumps. “I had a full bar one day, I’m talking with everybody, but one man is eating with his head down and he looks up and says, ‘Will you ever shut up for five minutes?’” Kenny recalls.

“I said, ‘Sorry sir, I’m only doing me job, but I will give you that wish and not talk to you for five minutes.’ And when he was ready, I said, ‘Is it OK now sir?’ and he said, ‘Thank you very much.’ The customer is always right!”

With deference to that service-sector truism, we offer a contrasting view: You don’t ever want Cyril Kenny to stop talking.

And his personality is a pot o’ gold for the soul.

“Hospitality Heroes” is a program created by the Las Vegas Convention and Visitors Authority (LVCVA), in conjunction with the U.S. Travel Association’s National Travel and Tourism Week, celebrated annually in May. The LVCVA (which produces Las Vegas Newswire) and its tourism partners honor employees who deliver superior customer service. Since the program began in 2008, nearly 600 “Hospitality Heroes” have been recognized in Southern Nevada.

To offer feedback on this story or suggestions for future stories on Las Vegas Newswire, contact Managing Editor Steve Bornfeld at SBornfeld@lvcva.com. 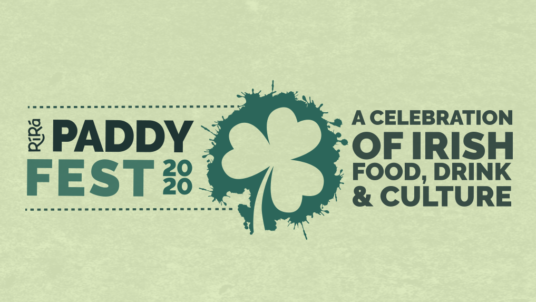 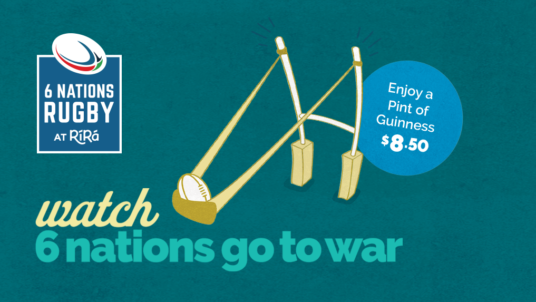 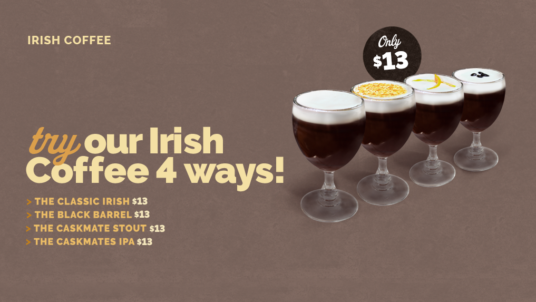